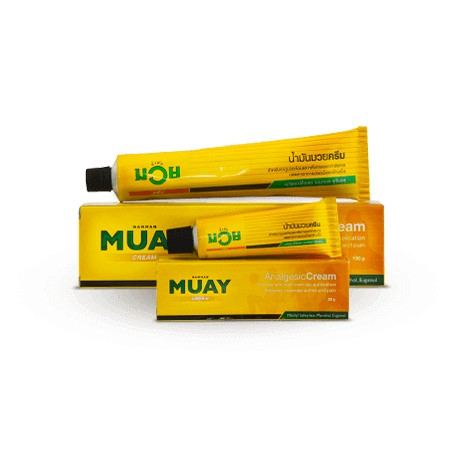 This product is no longer in stock

Customs and import regulations for Germany

For what the Muay Thai cream is actually used, understand outsiders rarely. Professionals, however, know exactly what it is used in Muay Thai, Kickboxing and MMA. Thai oils, Thai creams and the famous Tiger balm warm up the muscles, relieve tension and pain-relieving as well as sore muscles. Besides, blunt force impact on the fighter is a little distracted. Therefore, judges can often be seen freeing fighters from oils and creams.

Use of Thai oils, gels and ointments for other sports:

But not only fighters appreciate the unique effects of Thai oils and liniments. In modern times, the benefits of medications and ointments have also been discovered in other sports. It is not uncommon for them to use Thai oils and massage creams in football, hockey or other athletic sports. The circulation-promoting effect and the prevention of joint problems, bruises, a shortened warm-up phase and ligament irritation are just a few of many advantages ...

Muay Thai Oils and Thai Boxing Liniment fall under Medicines in Europe. However, they are not prescription and are free and available without a prescription. Since the ingredients are all purely natural and are not dangerous when used externally, it is not necessary to go to the pharmacy. Thai oils, liniments and ointments may only be used externally! Contact with eyes, mucous membranes, wounds, inflamed skin should be avoided!

Side Effects of Muay Thai Oils and Gels:

Since Thai oils consists only of natural extracts, no side effects are to be expected, as long as Thai oil is used externally. Applied internally, Muay Thai oil is poisonous!

Besides, it is not suitable for pregnant or lactating women due to precautionary measures!

Excessive use may rarely enter the body / bloodstream through the skin. Mild kidney pain can be the result.

Are Thai oils dangerous for athletes?

Again and again, there are voices from athletes who refuse to use Muay Thai oils.

Thus, it is feared that the hot feeling of the body is optimal operational readiness faked and it can lead to sports injuries. In addition, Thai fighters fear becoming addicted to oil and no longer preparing for the fight and warming themselves up.

Muay Thai World can not understand any of these concerns. Thai oils are an important and traditional part of Thai boxing and, when used correctly, only have positive effects:

Thai oil before the fight:

Especially in hot countries, an excessive warm-up phase is very exhausting. Muay Thai oils shorten this. Partly fighters are observed who do not warm up at all and only rely on the effect of Muay Thai oil and ointments.

The effect of Thai oils, gels and tiger balm as well as Thai creams and ointments before the fight:

Thai oil for aftertreatment after a fight and after training:

After a fight the body is particularly strained. Again, the ointments and Thai oils are optimal and bring many benefits. Injuries heal faster and pain is relieved. Even in massage parlors, Thai oils are often used as the relaxing and relaxing effect is a pleasure for the whole body.

The effect of Thai and sports oils after the fight:

Effective help with strains and sprains.

Tiger balm has similar properties to the aforementioned Thai oils. But since Tigerbalm is a solid ointment, it is rather not suitable for an application on the whole body. Much more should bruises, tension and arthrosis, neuralgia, sciatica, lumbago, disc and cross discomfort, muscle tension such. B. neck stiffness treated with it. Pain from sports injuries such as sprains, bruises and strains can be effectively counteracted in the context of sports massages.

But even with colds such as cold, cough, sore throat, bronchial complaints or itching by insect bites Tigerbalm is a reliable partner. Application in Muay Thai (Thai Boxing) by Tiger Balm and other ointments: In Muay Thai (Thai Kick Boxing) Tiger Balsam is mainly used for post-treatment of punctured bruises. It is particularly suitable for bumps and knots in the tibia or tense muscles. Tiger Balm can also be used for massages after or before combat and training. Counterpain sports cream: Counterpain ointment is a remedy for the treatment of painful sports injuries. Counterpain ointments are available in a cooling or warming version and can therefore offer the optimum solution for every sports injury. Buy Muay Thai Oils, Liniment Ointments, Muay Thai Cream and Tiger Balm: In Thailand you buy Thai oils and Tiger balm best in pharmacies, drugstores, supermarkets or martial arts schools. In the Western world, these funds are best and cheapest available on the Internet. Here is an overview of the best Muay Thai oils and ointments available on the market:

3 other products in the same category: